Thorvaldsen had an atrium connected to his three workshops in Rome, located on the corner of Piazza Barberini and the street now Colonetta di Barberini, but then called Vicolo della Catena or Vicolo delle Colonnette. Thorvaldsen obtained the lease for the three workshops surrounding the atrium in November 1815 from the nobleman Francesco Barberini, titular prince of Palestrina; cf. the lease dated 14.11.1815. This lease granted the sculptor the right to tear down the interior walls, etc., of the three small cottages in order to turn them into workshops. Initially, Thorvaldsen was to cover the expenses for these renovations himself; but he would ultimately receive compensation for these outlays from the prince.

In January 1816, Thorvaldsen was already at work on the new workshops. This is attested by the Danish painter C. W. Eckersberg, who was then residing in Rome on a fellowship:

“Thorvaldsen is currently engaged in building and decorating a quite beautiful and spacious atelier, made up of three separate buildings surrounding a small garden with a fountain, which may well become just as beautiful as it is cozy.”

A picturesque oasis staffed by a gardener

The small atrium is described briefly by Just Mathias Thiele as “this spot so dear to me,” and later in more detail in the following idyllic account:

“A gate opens the entrance to a little garden, and an arched arbor path, shaded in the warmest summer months by grapevine leaves and hanging grapes from above, and by a rosebush from below, leads to three of our artist’s studios. ... The garden is uncultivated, so to speak; here and there among the hollyhock there is a large, brownish-red pot with an aloe plant, while the wild roses climb meanderingly among various marble stones and blocks, which give shelter to a pair of tortoises crawling around by the wall. In one corner of the garden, the studios and the plant-covered adjacent wall form a cool grotto, where a little fountain splashes into the moss-covered basin.”

Thorvaldsen’s workshop accounts indicate that the sculptor also bore expenses for the maintenance of the atrium. These include purchases of grapevines, a pergola (overhead arbor), and flowers; cleaning costs for the atrium’s stone basins; and payments to a gardener. 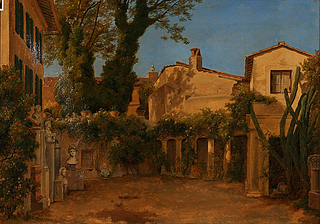 A. W. Boesen: Bertel Thorvaldsen’s Atrium in Rome, presumably from 1845-1847 or 1857. Oil on paper, 39×55 cm. Privately owned. Unsigned. This painting likely derives from one of Boesen’s stays in Rome during the years 1845-1847 or in 1857. Its original title is unknown; Bruun Rasmussen Kunstauktioner A/S, who sold the painting on August 11, 2010, called it Thorvaldsens Villa i Rom [Thorvaldsen’s Villa in Rome], but that can hardly have been the original title, as this location, by the workshops near Piazza Barberini, is not where Thorvaldsen lived.

The spot where Thorvaldsen’s biography was conceived

It was precisely in this picturesquely described atrium that, according to Thiele, Thorvaldsen expressed his wish that someone would write his biography. Thiele prefaces his account of Thorvaldsen’s request with the following overture:

“But among all the museums, churches, and art collections that I had diligently visited, there was one place to which my whole heart was devoted, and which I loved almost at the cost of all the others—namely, Thorvaldsen’s studios at Piazza Barberina [sic]. ... I spent the afternoon of Sunday, May 1, in a melancholy mood, in the little garden that lay between the small studios under the mighty walls of Palazzo Barbarini. I sat there all alone on my garden chair, with only a little tortoise crawling around for company; I was at work adding a new page to my sketchbook to remind me of that cherished spot.”