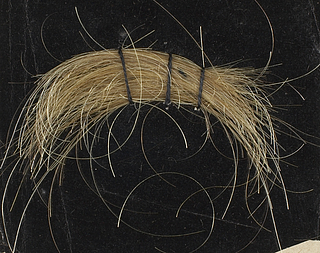 The reader is here offered the pleasure of reviewing some of the stock of Bertel Thorvaldsen’s hair that is preserved at Thorvaldsens Museum—along with a clipping from the memoirs of the sculptor’s valet, C. F. Wilckens, which describes the background to this bizarre strand of the Museum’s collections. As will become clear, the Thorvaldsen hair mania seems to have started as a rivalry of sorts between the valet Wilckens and Thorvaldsen’s friend, Baroness Christine Stampe, each of whom sought to gather the largest collection of the master’s locks.

Yet these two were not the only ones involved in this peculiar cult of Thorvaldsen’s genius. After the sculptor’s death, for example, Jonas Collin—a senior state official, co-director of the Danish Royal Theater, and chairman of the Committee for the Establishment of Hairvaldsens Museum—saw his chance to liberate numerous locks of hair from Thorvaldsen’s corpse.

The satirical newspaper Corsaren [The Corsair] quickly got wind of the cult phenomenon. Only three weeks after the genius sculptor’s death, Corsaren printed a mockumentary of sorts, indicating that demand for the dead man’s tresses had now reached such a scale that the remaining professors at the Royal Academy of Art were now duty-bound to put their own coiffures at the disposal of the public, in order to keep supplies steady. Corsaren’s parody is reproduced below.

The valet Wilckens evidently served as the driving force behind the capillary cult’s spread, as well as the artist responsible for its most fanciful hairtifacts; see, e.g., N327. Wilckens often had these works accompanied by the world-famous artist’s calling card, along with the text “Privy Councillor Thorvaldsen” – apparently as a kind of official guarantee of the relic’s authenticity; see N226.

It is evident from Wilckens’ text that his compulsion to gather hair by no means stopped with Thorvaldsen. Wilckens’ chamber of wonders also included such fantastic objects as a box of Napoleon’s mother’s hair and a piece of chalk from Raphael’s tomb, both of which are found today in Thorvaldsens Museum; see N86 and N87.

The cult can perhaps be said to remain active in present-day Danish flower shops, where feather grass (Stipa pennata) is still sold today as Thorvaldsens hår [Thorvaldsen’s hair], a name that perhaps has roots in 19th-century hair collecting.

From time to time, the museum receives new locks of hair from generous donors. These are appropriately assigned an inventory number starting with N, which is associated with the group of objects known as Thorvaldseniana. Here each artifact is accompanied by some words deriving either from the Museum’s own inventory protocols or from the short texts accumulated by each lock along its journey to and among the collectors—normally the Copenhagen haute bourgeoisie—in efforts to verify its authenticity.

Both the dispassionate prose of the inventory protocols and the orderly composition of the hairtifacts themselves belie only begrudgingly—but all the more clearly for that (!)—the hair-collecting cult’s complex and grotesque yet glorious mix of idol worship, death, vitality, animism, symbolic power, intimacy, disgust, repressed sexuality, intimacy, surrogate intimacy, museumification, kitsch, hoarding, a fetish for order, snobbery, social climbing, and more.

DNA analysis of the hair clippings is indeed under consideration.

A Clipping from Wilckens’ Memoirs

It was in a strange manner that I became a collector of Thorvaldsen’s hair. I discovered that his hairbrush and comb had been cleaned, without knowing who had done it; and so I decided to clean them right after dressing him, as my first subsequent task. A few days later, Baroness Stampe approached me and asked: “Who is taking Thorvaldsen’s hair? For several days now I have missed it, and I am collecting it.” Now I knew who had taken the hair from his brush and comb—and it immediately occurred to me that I should have begun doing so myself long ago. So I responded: “I am the one who does it, your Grace! And I hope you will forgive me for continuing to do so; for it certainly must belong to me, as his valet, when he is here in town.” In order to be certain that I was permitted to take it, I asked Thorvaldsen if I might keep the hair that I took from his comb or cut off [while trimming him]. Thorvaldsen smiled and said: “Do you want to collect my hair now? Well then—go ahead, if it interests you! But if you want to be a hair collector, then you should also have a tiny little lock of Napoleon I’s mother’s hair.” With those words, Thorvaldsen went to his escritoire. Taking out the box in which the lock lay, he gave me half the lock. “Now this is hair worth saving!” he said. Later that day, he also took out a box containing chalk from Raphael’s grave. Thorvaldsen had been present at the opening of the grave, from which he, like the others present, had taken a bit of chalk. “Because it seems that you want to be a collector,” he said, “it is best that you also have some of this.” Naturally, I accepted these gifts with gratitude. Many years later, at Thorvaldsen’s final disposition at the Museum, I saw that some pieces of chalk had fallen out of the gravesite. I gathered these up, and at Thorvaldsen’s Centennial Festivities I gave a piece to each member of the organizing committee.

A Page for Thorvaldsen’s Album.

Mr. Frederik Barfod intends to gather all public notices, etc., referring to Thorvaldsen, and to publish them as Thorvaldsen’s Album. He has issued an invitation to all people to send him contributions, and we do not hesitate to send him the following. Let it be called:

A Wig and Many Bald Men.

When word of Thorvaldsen’s death reached the public, Fædrelandet, as is known, wailingly tore its hair. This, however, had no further consequences.

More consequential was the effect of the world-famous artist’s death on Prof. Heiberg. Whether it was out of grief for the departed one, or out of despair over finding a rhyme for the declamatory poem that Mrs. Heiberg was to recite in the Royal Theater on that occasion, is yet unknown; what is known is that he too tore his hair. 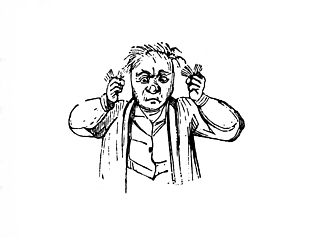 Those who doubted the truth of this became convinced after seeing and hearing how farfetched [haartrukket, lit. “hair-pulled”] the declamatory poem was. What is certain is that, from now on, Prof. Heiberg must wear a wig.

So much for the wig.

Another fact is less well-known. It emerged like a mystery in the night’s silence. But even the night is quiet no more; it has revealed all to Corsaren.

When the great late man lay in state, with the laurel wreath on his head, and was to be buried on the following day, it suddenly occurred to a noble lady that she had no memento of Thorvaldsen—and this she needed to have.
She was not as fortunate as Chief Physician Jacobsen, who had received an uncanny souvenir at the very moment of Thorvaldsen’s death.
But as stated, she was determined to have a memento; so she sent word and requisitioned a lock of the great artist’s hair.
No sooner had this become known than nearly every noble lady sent word and similarly requested a lock.

Thorvaldsen was a great artist and an upright man; but he was no Samson. Or so the Committee said to itself, at an extraordinary meeting convened to confer on what was to be done about the matter.

But then an idea arose—a brilliant idea. Here one can see what despair can lead to. The idea was to allow others to give hair to others—naturally, to other artists.

Naturally, the students were not worthy of representing Thorvaldsen with their hair. It was therefore with a certain pride that the professors offered their hair, their heads’ glory, for the cause. 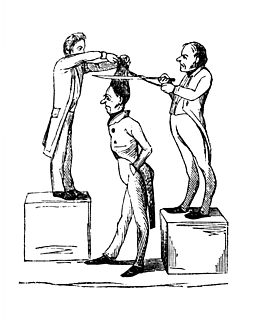 Some of this hair was black, some grey, some red; while Thorvaldsen had had white hair.
The ladies wondered at this, and one, who had received a large red curl, said: “I have surely been swindled; the servant went up to a barber.”
But the Committee, to whom she sent an inquiry, replied that she had not been fooled. She should consider that people change in death.

That fact is unprovable.
But enough: this is why we have such bald professors at the Academy. 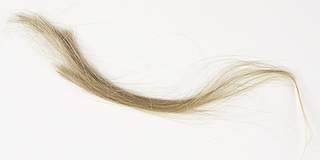 N230: Inscribed on the paper wrapping:
“Thorvaldsen’s hair – Mother received it from Uncle Caspar Kongslev,
who was an instructor at the Academy of Fine Arts”