On Genii and Angels in Thorvaldsen's Art

Angels and Genii in Thorvaldsen’s Art

In Thorvaldsen’s art, both angels and genii are depicted as winged beings – they can be represented as chubby little boys or beautiful young men. They are never represented as women or girls. In the case of young angels, they are always dressed, while young genii are most often depicted naked or half-naked. In the case of small boys, they are most often naked regardless of type.

At the end of the article, there is a chronological survey of Thorvaldsen’s angel and genius motifs and cases that can be difficult to place unambiguously in either category.

In terms of motifs and ideas, genii as well as angels are associated with the so-called cupids of Antiquity, i.e. small winged beings that served as messengers for the gods and attended humans as tutelary spirits all their lives. The antique Roman genii were such tutelary spirits resembling little boys that were attached to individual people, and they are frequently used as a motif on sarcophagi and in architectonic decorations (e.g. in the form of the so-called reggifestoni, i.e. genii carrying garlands, see fig. 1 and 2).

The small genii were taken over by the early Christians as images of angels, e.g. in catacomb paintings and on sarcophagi. In the Middle Ages, however, it was rather the adult goddess of victory (Greek Nike, Roman Victoria) who served as a model for representations of angels, and little boys did not really emerge again until the Renaissance and the Baroque under the generic name of putti – as images both of angels in a religious context, of genii and the so-called spiritelli (small winged spirits associated with and influencing life and respiration), and of Cupid’s (and Venus’) attendants when representing earthly love (i.e. cupids proper).

There is (at any rate in principle) a great difference between their devout religious significance and a worldly, ultimately wild and orgiastic, meaning. Therefore, context is crucial for decoding the meaning of the motif. When the context of the motif is unclear, it can of course be difficult or impossible to distinguish one from the other. For the same reason, it is also possible for the artist to play on both associations.

In the art historian Charles Dempsey’s book Inventing the Renaissance Putto, the reborn Renaissance putto is generally referred to as spirello in the works of the Italian sculptor Donatello (ca. 1386-1466), who is credited as the artist who revived and renewed the representation of the small, often winged boys in art. I.e., they are more closely related to genii than to angels. Dempsey (following the German art Historian Wilhelm Bode (1845-1929)) argues that they, like the Satyrs in antique Greek drama, serve to release tension – i.e. the new putti have functioned as a relatively independent counterbalance to the heavy, serious, and dramatic content of the main narrative – in the Greek tragedies or in the many representations of the life of Christ and the countless depictions of or references to the executions of saints.

The Motifs in Thorvaldsen’s Art

In Thorvaldsen’s works, there are far more genii than angels. Actually, few works with unambiguous angel motifs are known, and they are primarily connected with the commission for the Church of Our Lady and Christiansborg Palace Church in Copenhagen. Also the relief The Annunciation A569 (fig. 3) represents, given its literary source, an angel, i.e. the Archangel Gabriel, but even this representation may, according to Nanna Kronberg Frederiksen’s article Venus Priapus, actually turn out to be ambiguous and thus, in spite of the unambiguously Christian point of departure, belong somewhere between Christian and antique iconography.

Another ambiguous type can be seen in the relief The Child’s Guardian Angel that may be perceived both as an angel and as a classical tutelary spirit, i.e. a protective genius connected with an individual, even though its attire is clearly closer to Thorvaldsen’s other demurely dressed representations of angels (fig. 5). 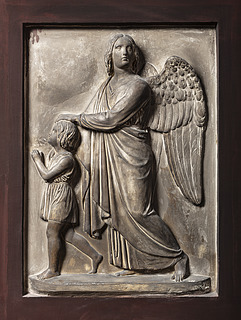 In addition to these, there are several reliefs with small winged putti who, given their ecclesiastical context, are generally considered as angels instead of genii: the relief with the present title Three Hovering Angels, cf. A555,3, which constitutes one side of the four-sided Baptismal Font, cf. A555 (Fig. 6), originally executed for Brahetrolleborg on Funen, and the two reliefs with garland-carrying, hovering putti, commissioned for the Communion table in the cathedral of Novara, cf. Hovering Angels, A590 and A591 (Fig. 7 and 8). This commission specifically stated that they wanted a variation of the so-called gloria relief on the above-mentioned baptismal font.

The reliefs for the Novara Cathedral are characterized by the covering of practically all sexual organs while two other putti reliefs, previously erroneously considered to be connected with the Novara commission, reveal everything. This may be an important distinction in relation to Thorvaldsen’s religious and secular iconography.

Even though an amanuensis for Thorvaldsen in a draft referred to the garland-carrying Novara putti as “ sei angioletti con ghirlande” (six little angels with garlands), they are, with regard to motifs, very close to a chimneypiece relief in which the represented putti are called cupids, cf. A592 (Fig. 9) – not angels. This chimneypiece relief has a clear connection with Thorvaldsen’s so-called angel frieze (Fig. 10) in Christiansborg Palace Church.

However, this type of little putti was known in antiquity as a popular sarcophagi and sima motif, cf. the above-mentioned terracotta fragment in Thorvaldsen’s own collection of antiquities, Campana relief with a Cupid Carrying a Garland, H1114 (fig. 1).

Thus, the garland-carrying putti often play a double role with one foot in antique and the other in Christian mythology so that it will often be context that determines whether they are perceived as angels or genii.

This ambiguity and context dependence can be extended to include Thorvaldsen’s treatment of angels and genii generally since both types, as mentioned at the beginning, ultimately refer to the Greek and Roman cupids. The above-mentioned distinction between total nakedness (cf. the chimneypiece frieze) and the modest covering of sexual organs (cf. the Communion table of the Novara Cathedral) has probably been an important indicator to Thorvaldsen for placing the motif primarily in one or the other context, but it is, significantly, not consistently carried though. The ambiguity or openness in Thorvaldsen’s representations of angels and genii must therefore be seen in direct connection with his other intellectual and attribute-shifting iconography, cf. also the related article Shifting of Attributes – a Fundamental Feature in Thorvaldsen.

This apparently effortless alternation between religious and secular iconography points to a further problem, i.e. the titles. Most often the titles under which we know the works today were added later, and often a work was known under several different titles in Thorvaldsen’s time – see an example of this in the related article From Genii to Angels and Back. With one title, the motif is locked in one reading, which immediately seems to exclude other interpretations. Thus, the ambiguity and the interaction between antique and Christian mythology, probably quite conscious on Thorvaldsen’s part, is limited. When one reads the titles in the survey below, one must, for the moment at any rate, take at least some of the titles with a pinch of salt and let ambiguity prevail.