“The Barbary States” was a general term used to refer to the Ottoman states of Morocco, Algeria, Tunisia, and Tripolitania (present-day Libya) in North Africa. The Barbary States—or “the Barbary Coast,” “the Barbaries,” “the Berber Coast,” or “Barbary,” as the region was also called—was an area notorious for sea piracy and kidnappings of the European and American sailors who plied the waters of the Mediterranean and eastern Atlantic.

Following the repeated failure of attempts to stop piracy and enslavement by force, the major European sea powers all ultimately signed treaties providing tribute payments to the Barbary States in exchange for free passage for their trading ships.

Denmark, in particular, entered into a treaty with Algeria in 1746 guaranteeing free passage for Danish ships in exchange for an annual payment in the form of gifts, money, and arms (i.e., cannons, bombs, gunpowder, and bullets). Corresponding treaties were signed between Denmark and Tripolitania in January 1753, between Denmark and Tunisia in February 1753, and between Denmark and Morocco in May 1753. As a result, each year a Danish so-called “gift ship” was sent with a “cargo of presents” to one of the Barbary States. 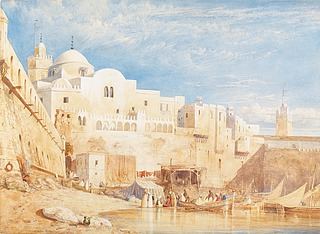 These agreements on the payment of tribute—or tolls, if you will—opened the Mediterranean to Danish trading companies, shipwrights, and sailors, precipitating a great upswing in trade, sea travel, and cultural exchange. One could now buy and sell one’s wares internationally, and Danish ships could take part in the growing traffic in goods between Mediterranean harbors and those in Northern and Western Europe.

Private trade and seafaring were supported by active official Danish policies, which were reflected in a large number of Danish consulates set up in harbor towns along the main routes of Danish trade. Denmark’s consuls helped to coordinate shipment traffic, and worked to ensure that communication between senders, receivers, shippers, customs officers, etc., proceeded smoothly. An example is the Danish consul in Leghorn, J. C. Ulrich, who played a crucial role over the course of three decades in facilitating the shipment of Thorvaldsen’s artworks to customers throughout Europe.

Here are a number of other concrete examples of how Thorvaldsen profited, both during his travels and at his workshop, from Denmark’s connections with these North African states: