A Monument to Freedom 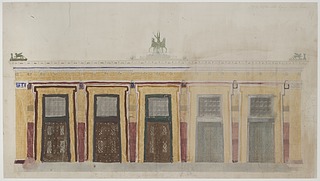 Our forefathers’ wisdom and experience are hidden in the past, and every generation rediscovers and adapts those ideas and expressions which it feels are best suited to present needs.
C.F. Hansen (1756-1845) and his contemporaries found their true knowledge of architecture in the Rome of Antiquity, in Vignola and Palladio. It was C.F. Hansen who was given the task to restore Copenhagen, the capital of the Danish absolute monarchy, after the fire and the destruction of war, and to give the city the Roman-Classicistic characteristics, which were clarity and symmetry, pure geometrical forms in a static composition inspiring clearness and order.
His students saw the same monuments, but their attention was directed towards other epochs as well, and they were able to include Greece in their itineraries. They experienced the variety of form and colour which were hidden in the sources of European culture. The new generation of architects wanted to make free use of all this newly discovered richness and knowledge. This wish was an ex pression of freedom and optimism, a life affirming gesture, which would undermine the tyranny of absolutism and celebrate the free art of free people. The Thorvaldsen Museum would become a symbol of the recovered freedom. The sculptor Bertel Thorvaldsen (1770- 1844) who had been living in Rome since 1797 contemplated returning to Copenhagen where his countrymen wanted to build a museum for him.
When Gottlieb Bindesbøll (1800-1856) arrived in Rome in 1834 he won Thorvaldsen’s complete confidence as the right person for the task. Thorvaldsen had conflicts with C. F. Hansen when decorating his buildings in Copenhagen. A new concept of space prevailed. Sculpture was not just architectural decoration but independent objects in space. The hierarchy of the art forms broke down, They were now equal and together they would express plurality.
Thorvaldsen’s familiarity with the qualities of marble and the expressive power of the human body enthused his contemporaries. They called his art natural and his Nordic spirit (his family roots were traced back to his Icelandic forefathers) was said to unite Greece and Rome. There was a longing for a total impression of everything that was known about European culture.
The capitals of Europe collected works of art from every historical epoch and built museums for them. Greatest of all, however, was Classical Antiquity and the climax was classical Greek art, which could now, after Greece’s liberation, be studied in its original setting. During the excavations of Pompeii and Herculaneum the terrible disaster was uncovered. But in the colourful buildings which were now exposed in broad daylight, the petrified victims came back to life in the imagination of the spectator. Life would go on in the three-dimensional art of the Hellenes, and in the Thorvaldsen Museum it was meant to open the visitor’s eyes to the messages of the art objects and to secure Thorvaldsen eternal life.
Architecture was supposed to be reborn through polychromy, “It is colour which ties all ages and people together”, Leo von Klenze, Munich’s leading architect, wrote. It was necessary for Thorvaldsen’s architect in particular to find genuine and true inspiration at the purest sources. Bindesbøll had received the gold medal of the Royal Academy in 1833 for his “Lutheran Main Church”. It was a Gothic cathedral inspired by the common Germanic spirit which was now becoming manifest in the completion of the cathedral in Cologne. He had studied polychromy and had consulted leading specialists in the field, and now he himself was going to do some studying in both Pompeii and Athens. Before he left he turned in a rough design for a building for Thorvaldsen’s statues to the Charlottenborg exhibition of 1834. This was the first attempt in the Hellenistic style to be praised by his teacher G.F. Hetsch and used in the latter’s teaching. Hetsch himself was a student of Charles Percier, but it was Karl Friedrich Schinkel, he referred to. Hetsch was the only one, who had submitted a project to the competition for the Thorvaldsen Museum in 1834. He was the most dangerous competitor, but fortunately his proposal, a Pantheon, was much too expensive and impractical, indeed somewhat obsolete, but in order to be on the safe side Bindesbøll made some pantheon-like sketches. He was absolutely determined to get the assignment. In Berlin he had seen Schinkel’s Altes Museum (1823-1830) and in Munich Leo von Klenze’s Glyptothek (1816-30). Both of these buildings greatly influenced his views of the museum as an abstract idea. In Florence he saw the Palazzo Pitti and Ospidale degli Innocenti, whose facades he also tested for the museum. Rome was a revelation of new architecture. Guiseppe Valadier’s Piazza del Popolo and Pincio, Luigi Canina’s entrances to the Borghese garden and Antonio Asprucci’s garden temples. Everything was permitted; motifs from all epochs were revived in the present. In Thorvaldsen’s library he had the opportunity to see pictures of the new archeological discoveries and of the latest architecture. In Thorvaldsen’s studio he was introduced to Thorvaldsen’s concept of space. Through the dimmed window he saw the sculpture and the room in the best possible light. He understood the importance of contrast in form and material, light and colour.

Together with his friend Christian Hansen (1803-83) Bindesbøll participate d in the exploration of the new linds at the Acropolis of Athens, measured them and registered carefully all traces of colour. He also found that the temples were autonomous. They were not related according to any geometrical system. From the Propylees one approached the temples from an oblique angle and their position renounced any idea of frontality. The sort of free space which Thorvaldsen demanded for his sculptures, the architect could demand for his buildings, the monuments of a new era, dedicated to free people – schools, libraries, museums. Only God and the King had previously been granted such privilege.
When Bindesbøll returned to Rome he sent a polychrome prestige project, a “Portico for the Pleasure of the Public”, to Copenhagen, a project which was intended to show the building authorities that he was better than both Hetsch and Schinkel. But in an accompanying letter to the chairman, his uncle Jonas Collin, he enclosed a more realistic design with explanations of light coming from oblique angles and monumentality. This small sketch in letter form contained the main theme and the spatial principle of exhibition of the final proposal.

Two parallel wings from the age of E. D. Häusser were built on the allotted site behind the church of Christiansborg. These had been rebuilt in 1820 by C.F. Hansen and would now be subjects of a third change. Hansen had changed them into a three-winged building with a large portal facing Stormgade and had had the two facades facing the canal plastered in order to have the coach yard fit into the style of the surroundings. In a simple way Hansen had broken the wholeness of the Baroque and replaced it with his own system of addition. In 1839 Bindesbøll began to rebuild. Like Hansen he avoided any change in the division of bays and he carried out his ideas about space and monumentality by equally simple means: the visual liberation from a geometrically ordered, hierarchically organized system. While working on the building the original ideas were developed and Thorvaldsen’s decision to have his burial chamber placed in the courtyard of the museum released a multitude of symbolism depicting life and death, the resurrection, eternity and the victory of light over dark…
Bindesbøll removed the connections to the castle and had Hansen’s intermediate building torn down. Instead of it he added a hall with live full-sized portals and at the opposite end he closed off the yard with a hall dedicated to Christ and the twelve apostles. The windows were placed on a higher level in order to give the sculptures the right sort of spatiality. Through simple measures, such as having pilaster-strips around all openings and using polychromy, the carriage depot was changed into an autonomous monument in the block of buildings of the Slotsholmen. These changes also reflect the fact that C.F. Hansen and Bindesbøll worked according to the same rules of art and that the possibilities of variations are unlimited. The street leading away from Stormbroen was not lead straight to the museum but was divided into two streets surrounding a plantation which prevents one from approaching the building frontally. The autonomy became a symbol of freedom in itself, an Acropolis-model for the monumental architecture of the new national states.