Bertel Thorvaldsen and the Danish Artists in Rome

The Danish Naval officer on the frigate Rota, Hans Birch Dahlerup, had gone to Rome to bring the sculptor Bertel Thorvaldsen back to Copenhagen after more than 40 years away. They left Rome by midnight on August 5th 1838. Years later, in his memories, Dahlerup recounts the story of the day he first went to meet Thorvaldsen, and how he had gone, dressed in his uniform, to show the official errand and “…to properly honour the man that the King was bringing home with a warship”. This kind of reverence has stuck to the memory of Thorvaldsen. Dahlerup, by contrast, met a sculptor dressed informally in shirtsleeves, something for which Thorvaldsen did, however, apologize, when Dahlerup arrived in full uniform.

In all probability Danish artists also brought some kind of awesome expectation for Thorvaldsen with them from Copenhagen. Thorvaldsen’s international reputation had continued to grow since his works had been fully acknowledged in Rome in 1803. In 1805 he was appointed professor of sculptor at the Royal Academy of Art in Copenhagen, and for decades the Danish king eagerly appealed for him to return to his native city, Copenhagen.

There is no doubt that the young Danish sculptors who went to Rome often felt frustrated when working as assistants in Thorvaldsen’s workshop. Their ambition was to become artists in their own right. The painters worked in another medium and their relationship to Thorvaldsen was relatively uncomplicated by comparison. In any case, for all new arrivals from Denmark, Thorvaldsen was the “key” to everything in terms of how to ensure a pleasant stay, what to see, where to go, and whom to meet. No less important was the fact that the well-established Thorvaldsen also was a source of economic support. The young artists met a sculptor who had become a powerful man.

Whenever a Danish newcomer approached Rome from the north and first caught sight of the city, he would be met by a number of Danish and German artists on the other side of Ponte Molle, the bridge also known as Ponte Milvius. From there they would walk to Porta del Popolo before going in through the city walls together.

Within a couple of weeks of arriving, the newcomer would enjoy an early taste of the pleasures and diversions of Rome at a welcoming party, where his first duty would be to pay for everyone’s beverages as part of the admission rituals to this festive society that bore the name Ponte Molle, taking its name from the bridge. Thorvaldsen was a member of the society from the early 1810s. The Danish poet Hans Christian Andersen also attended one of these events, and on 18th November 1833, one month after his arrival in Rome, he records in his diary that “…in the evening Ponte Molle was at Lepre” which means that they had gone to a trattoria named Lepre, which was situated in Via dei Condotti near the Spanish Steps. This is the area where the Danish and German artists usually stayed, such as in the Palazzo Zuccari, not far from where Thorvaldsen lived in Palazzo Tommati in Via Sistina.

There was a daily schedule of times for the artists to meet and a regular pattern to the meetings. In a draft made for his autobiography, the painter Constantin Hansen tells us that on Sunday mornings, Thorvaldsen would play host to everyone. During the week, one met at 6 am in Caffè Greco in the Via dei Condotti, which was then followed by a short walk to Monte Pincio. At noon, everyone would meet in the Via dei Condotti once again, but this time at Lepre to have something to eat, a cup of coffee and a cigar. Finally, there would be a get-together for an evening meal in some osteria. The frequent social gatherings played an important role for everyone and Hansen thus gives an impression of how frequently the artists actually met up. Hansen himself arrived in Rome in 1834 and remained for six more years after Thorvaldsen had left in 1838. 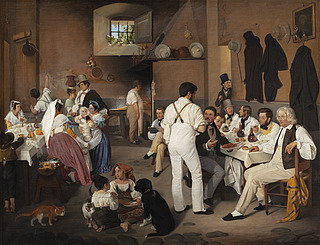 The mature, white-haired sculptor is portrayed seated at the head of the table, joined by six Danish painters including Blunck himself. Constantin Hansen is shown about to enter the room through the doorway. All the artists seated around the table were born in the years around 1800 and were young enough to have been Thorvaldsen’s sons. Seated in front of Thorvaldsen is the architect Gottlieb Bindesbøll, who was by then working on his project for Thorvaldsens Museum in Copenhagen. Bindesbøll was also living in the Palazzo Zuccari. 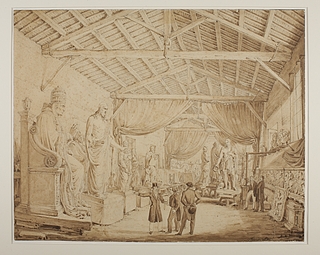 Ricciardelli: Ludwig I of Bavaria Visits Thorvaldsen’s studio near the Piazza Barberini, 1829, pencil with brown wash on paper, inv.no. D1771.

Thorvaldsen’s workshop next to the Piazza Barberini reached its peak during the 1820s. At that time European art collectors were again travelling to Rome after peace had been re-established in Europe following the Napoleonic wars and Thorvaldsen’s commissions increased in line with the growing number of travelers. 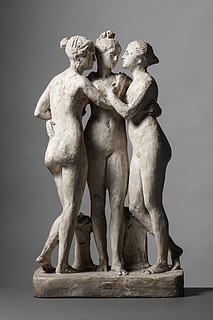 The rise was also augmented by the death in 1822 of Thorvaldsen’s most significant fellow sculptor, the Venetian Antonio Canova. 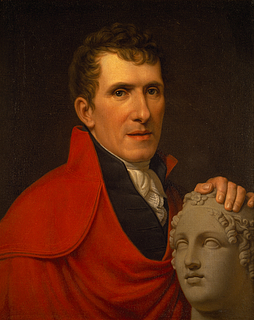 To witness the immense activity in Thorvaldsen’s workshop, to watch the high number of specialists he employed and to experience the cosmopolitan life he was part of, must have been extremely stimulating to the young Danish painters. Yet it may also have seemed to them like a fairy tale. Copenhagen and the small, autocratic Danish Kingdom they came from was an outpost so far as artistic matters were concerned. Seen in retrospect, however, the contemporary European collectors did not pay serious interest to these young painters. Those who dreamt about building up an international clientele were disappointed.

Several factors challenged the painters’ economy during their Roman years. Some of the painters experienced problems due to how long it took for a transaction to arrive. Others were in constant lack of money, particularly those who prolonged their Roman stay. Most artists had been provided with a small three-year travel grant before they left Copenhagen. It was possible to have this grant prolonged on the condition that the artworks they sent to the Art Academy in Copenhagen would convince the professors and the Danish King that their progress was sufficient. The painters had to prove why they deserved to continue their stay. Furthermore the Danish King would occasionally have commissions sent for them.

When facing acute economic problems there was another and much faster way out, namely Thorvaldsen. As a passionate art collector, he played a crucial role for the young Danish painters. At some time no later than 1834 Thorvaldsen’s home in Palazzo Tommati was expanded from three to seven rooms. The three room apartment had been so full of books, antiques and artworks that it was hard to find a chair to sit down on. The artists accessed Thorvaldsen’s books by way of a library. And the paintings Thorvaldsen had bought could also be seen here. A number of these paintings were by Danish and other European artists who had been in need of money. Some paintings had been bought in traditional ways, such as Blunck’s La Gensola, B199. Blunck had made a first version of the painting in 1836 under commission from a Danish titular counsellor of state, Just Henrik Mundt, after the latter had visited Rome and met with the artists. Blunck made a few changes in his second version in 1837, and Thorvaldsen acquired the painting during his final months in Rome, in the spring of 1838. As a part of Thorvaldsen’s bequest, the painting has belonged to the Thorvaldsens Museum since its inauguration in 1848.

Thorvaldsen’s other acquisitions included gifts, as well as a small number of paintings taken in commission for a loan of money. It is hard to say why, in a few instances, he found it necessary to do so. One example is Ditlev Martens’ painting The house of Michelangelo in Rome, B262, from 1833. 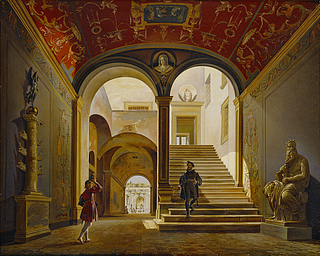 On January 28th 1834, Martens signed a receipt for a loan of 100 scudi from Thorvaldsen, for which he left this painting as a deposit until such time as he could pay back the sum. The loan was never repaid and so the painting stayed with Thorvaldsen until it finally became part of the museum’s collections. Some paintings in Thorvaldsen’s possession were originals. Others were replicas, and some were nineteenth-century copies after old masters, such as the paintings of Raphael (1483-1520) or copies made from portraits depicting Thorvaldsen. By the late 1830s, if not before, Thorvaldsen’s art collection in Via Sistina was often open to visitors on Sundays, a regime probably intended for a broader public.

Thorvaldsen mostly collected contemporary paintings. To do so was far from being a common choice. Collectors in Rome preferred old master paintings. So when the German diplomat and historian Alfred Reumont wrote in his two-volume publication, Römische Briefe, that the paintings Thorvaldsen owned constituted the only acknowledgeable collection of more recent works, the statement points to a common challenge faced by painters in Rome.

Besides the economic support, the Danish painters presumably also had great benefit from studying Thorvaldsen’s international collection of contemporary paintings. This was a way to gain new insight in what was going on in the art world on a European scale. Thorvaldsen had a direct advisory influence on the Danish painters’ compositions as long as they worked with the narratives of classical literature, e.g. Apulejus (c. 125-170 AD) and Ossian (third century). Thorvaldsen made rapid sketches on any piece of paper to illustrate his ideas. In contrast to Thorvaldsen, the painters left the classical subjects behind from the 1810s onwards, and increasingly turned to landscapes, Roman prospects and folk life scenes.

Artist portraits also became very popular. As a theme, artist portraits and workshops were particularly prevalent among the German painters, who at this time had achieved a romantic concept of the artist as a genius. Despite the Danish artists’ very close relationship with German painters in Rome, Danish painters in Rome performed this genre with much less enthusiasm than their German colleagues when it comes to portraying Thorvaldsen. Thorvaldsen was portrayed in more than 200 painted and drawn portraits, making him one of the most frequently portrayed sculptors ever. A high percentage of these portraits date from the 1830s, and many of them were painted by German artists, including Rudolph Suhrlandt. 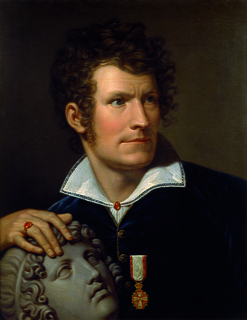 Other than the Holsteinian Blunck, there is a noteable absence of portraits representing Thorvaldsen by other Danish artists staying in Rome in the 1830s. Their proper contribution did not appear until after 1838 when Thorvaldsen finally was back in Copenhagen.

For painters like Ditlev Blunck and his Danish friends, Thorvaldsen’s influence was to a great extent limited to stimulating, encouraging efforts and economic support, when compared to the painters who stayed in Rome 10-20 years earlier and like Thorvaldsen worked from narratives known from classical literature. Painters in the 1830s met a friendly, maybe sometimes fatherly caring kind of sculptor with an impressive international network, consisting of artists, philosophers, merchants, diplomats, princes and kings. Thorvaldsen attracted attention in every kind of social gathering and played an important role as a link between European, Roman and Danish culture. He was a highly influential man in Roman artistic life. 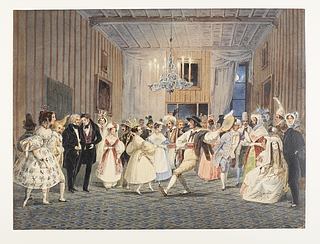 This may have provided the basis for a feeling of awe, but mixed with some kind of confusion. The Danish King’s desire to persuade Thorvaldsen to return to Copenhagen, and the Danish talk about the sculptor Thorvaldsen in Rome revolved around the story of a man who was more Danish than almost any other man on Earth. This phenomenon was much influenced by a growing national-romantic ideology. Yet, the sculptor Thorvaldsen, whom the young painters got to know in Rome, was a fully integrated member of a cosmopolitan Roman-based artist society and art world. To the young Danish painters, Thorvaldsen must have represented a clash between two ideological poles, but this seemed much less confusing, after Thorvaldsen had returned to Copenhagen in 1838. After this point, the prevailing sense was one of awe and reverence.