Thorvaldsen and His Ganymede and the Eagle 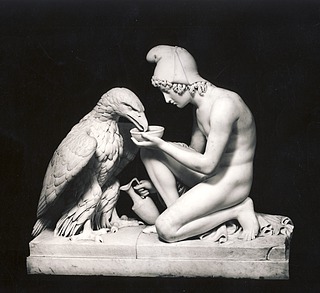 Thorvaldsen: Ganymede and the Eagle
Minneapolis Institute of Arts, Gift of The Morse Foundation

Among his many essays in the classical subject matter Thorvaldsen made five sculptures of the boy Ganymede, the most beautiful of mortals, who was carried away by Jupiter’s eagle to be the cup-bearer to the king of the gods. In 1805 for Countess Woronoff, the rich Russian heiress, he began a standing figure of the child, with his Phrygian cap and chlamys, holding out his filled goblet. (The best version is No. A854 in the Thorvaldsen Museum.) This statue uses the composition of a very poor ancient statue in the Torlonia collection in Rome and successfully imitates and rivals Canova’s style. 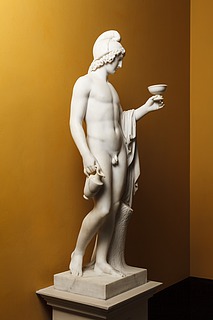 Thorvaldsen: Ganymede Offering the Cup, A854

In 1816 the Austrian consul at St. Petersburg commissioned a slightly different Ganymede, with the youth pouring the nectar (a version is in the Hermitage). The most famous statue was commissioned in the following year by the English Earl Gower, a Ganymede and the Eagle, which showed Jupiter in the form of an eagle receiving nectar from Ganymede’s cup, as the youth crouches on his cloak and holds an amphora in his other hand. Lord Gower’s statue has always been one of the most popular works of Thorvaldsen: Goethe owned a cast, there is a fine contemporary replica of unknown origin in the Thorvaldsen Museum (no. A44, perhaps the statue owned by M. Hottinguer in Paris in the mid-19th century), and a fair copy in the American Scandinavian Foundation in New York. 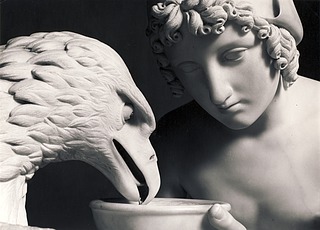 Thorvaldsen: Ganymede with Jupiter’s Eagle, A44

There are also two reliefs of Ganymede by the artist: the Hebe Presenting the Pitcher and Bowl of 1833 (Thorvaldsen Museum, A351) and the Ganymede and Eros Dicing of 1831 (Thorvaldsen Museum, A395). The latter is an amusing aftermath of the Gower group: the eagle turns his back but looks severely towards Ganymede (reversed from the statue and sitting more comfortably), who is apparently about to make a winning throw.
George Granville Leveson Gower, Earl Gower and, later, 2nd Duke of Sutherland (1786-1861), was a rich Englishman, a diplomat, a friend of the famous Queen Louise of Prussia, and an admirer of the even more famous Pauline Bonaparte. His father’s residence in London, Stafford House, contained in Gower’s day one of the very greatest collections of old masters in the world, a remnant of which (still owned by the family) are the great Titians in The National Gallery of Scotland. Earl Gower was in Rome in 1817, where his flirtation with Napolean’s sister left him enough time to commission both a bust of himself by Thorvaldsen and the Ganymede and the Eagle. The bust was done in 1828 and is now lost, although the original model is in Copenhagen; the group was not finished until a year later and, as the noble gift of The Morse Foundation, has now passed to his museum. 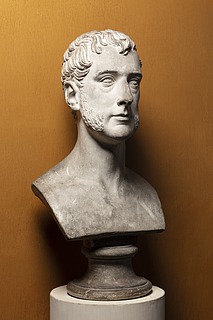 The Ganymede and the Eagle was noted as in progress in 1818, but may not have been worked upon during Thorvaldsen’s absence (from July 14, 1819, to December 16, 1820). Earl Gower could have commissioned the statue from a drawing, a small clay sketch, a life-size clay model. Or a life-size plaster model—which would be the stages of development before the reproduction of the full-size plaster in permanent marble. What was seen in Thorvaldsen’s studio in 1818 could only have been either the full-size clay model or the full-size plaster model, the clay model always being destroyed in the preparation of the plaster model. Perhaps Thorvaldsen also showed his patron and his later guests the classical authority for his composition: for example, an engraved gem such as the one he himself owned, the carnelian which Mr. Bjarne Jørnæs of the Thorvaldsen Museum has brought to my attention. Such sources were not only respectable means of inspiration but added, in Thorvaldsen’s day as in all the still literate moments of our culture, authority and interest to the work of art. 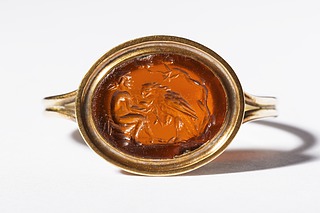 Ganymede with the Eagle. Graeco-Roman ringstone, 100 BC-100
In Thorvaldsen’s collection, I109

Thorvaldsen only slightly varied the traditional Italian practice of producing marble statues, a careful method of logical steps quite different from the modern method of working freshly, intimately, and somewhat undependably into the marble block. A large studio of well-trained sculptors, apprentices, specialists in stone cutting, in polishing, etc., would have done much of Thorvaldsen’s work, from the preparation of the large models in clay and plaster to the liberation and even to the final polishing of the marble. Theoretically, once the full-size plaster—which was traditionally kept by the artist received the master’s final touches, it was possible for the skilled Italian assistants to produce the finished marble product, even without supervision. Although this distant reproduction was the practice by the time Henry James was visiting sculptors’ studios in Rome a half century later, it was no more Thorvaldsen’s practice than it had been Canova’s, who seriously damaged his rib-cage through love of the harder carving, and who is known for his famous attention to pyrotechnics of the final chisels and rasps and abrasives which so determined the statue’s quality. Except that Thorvaldsen did much work on the marble and that much of this work was more than supervisory, one knows only that the best works (using quite different chief assistants) have the same high quality and character. This character is distinctive and intermittent, and, through close scrutiny, similar small traits establishing it can be discovered.
The artist’s account books in the Thorvaldsen Museum contain a number of payments from 1821-1829 for work on our statue by Thorvaldsen’s assistants. The payments are complicated and difficult to attribute definitely to the statue because, during the period, the studio was producing both the second version of a standing Ganymede and the Gower group. Also it is probable that several versions of at least one, and possibly both, statues were being done almost contemporaneously. What seemed to occur can be given as follows. The standing statue was worked on by Kessels, Tacca, Santi, and Bienaimé during 1819-1821, and it, or another like it, was worked at in 1823 and 1825, moved in October, 1825, and moved again, as apparently finished, on April 1, 1826. There are two groups of payments for Ganimede con Aquila: from February 10, 1821, to December 24, 1823, to Moglia, Ferenzi, Tacca (a drapery specialist), Calì, Amadeo, an unnamed stone-cutter, and an unnamed polisher; from December 1, 1821, to May 31, 1823, to Gaeti, Londini, Kauffman, and Bozazzi. There are also two records, one connected with the second group, for moving the statue (if only one is concerned) about the studios, under the dates of May 4, 1821, and April 5, 1823. From December 13-27, 1822, there are payments to Franceschi, Moise, and Poggi for a Ganimede con Aquila and thereafter other references to a Ganymede (with eagle) Abbozzato da Franceschi. Also, from June 23, 1826, to February 8, 1828, Luigi Bienaimé (one of Thorvaldsen’s finest sculptors), Bardi, an unnamed polisher, and an unnamed stonecutter (for the supporting base?) are paid. Against the date of June 13, 1829, there is the underscored notation Ganimede e Ultimato (“the Ganymede is done”). There are also, and finally, payments of September 26, 1829, and January 7, 1830, to put a Ganymede on its base.
What can be made of all of this? We know from other sources that on May 13, 1828, Lord Gower wrote Thorvaldsen that he had heard the group was finished, which was probably only true as to his portrait by the sculptor. Their mutual friend, Jørgen Knudtzon, the Anglophile Norwegian patrician, wrote the sculptor on June 16, 1829, that Lord Gower “longed” for his Ganymede and hoped it would be sent soon. And we finally know that Lord Gower wrote the sculptor on January 4, 1830, that it had arrived safely in London. The standard biographer of the artist, Thiele, noted that a second version was being produced in 1824, and I wonder if it is not possible that the clear specification of the Ganimede Abbozzato da Franceschi might refer to the second version, as well as to one of the groups of other payments (which one may be chosen by someone even more daring than I). There appears good reason to believe that the June 13, 1829, completion date refers to Gower’s statue.
It is amusing to note one last area of payments in the Copenhagen records which Mrs. Balslev of the Thorvaldsen Museum has kindly shown me: in the winter of 1830-1831 small amounts of money paid the feed bill of a live eagle. The eagle is best shown in Thorvaldsen’s oeuvre in our statue, and one wonders if these payments represent the pension of an honorably retired model.
On January 4th, 1830, Earl Gower wrote the sculptor a generous but brief letter announcing “l’heureuse arrivée de votre groupe du Ganymede et l’Aigle. . . . Chef d’oeuvre do vos mains. . .” As one of the more important and more delightful monuments of 19th-century sculpture, and as a masterpiece of the greatest Scandinavian artist, its arrival in Minnesota must also be a happy one, and indeed, one of especial appropriateness.